Google Penalty – Have You Been Hit?

Google Penalty – Have You Been Hit? 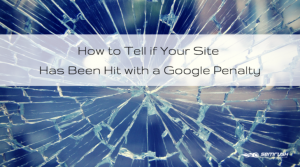 Google has been drastically updating its algorithms for the past few years. These updates were implemented to give users the best possible answers to their search queries and provide the best user experience (UX) possible. The resulting Google Penalties became necessary as Search Engine Optimizers like myself grew more sophisticated at finding ways to leverage things like links and targeted content to boost rankings and organic traffic.

The major updates of Panda and Penguin drastically changed the landscape and actually penalized sites for bending the rules and not completely following Google’s Guidelines. These updates are now engrained in the ever-changing algorithm set, continuing to penalize more and more websites every day.

There are two ways in which a site can be affected by these updates: a Manual Action or an Algorithmic Penalty.

In this post, I will discuss how to tell if a site has a Manual Action or Algorithmic Penalty. But first, a bit on the topic from the head of search spam himself, Matt Cutts:

Manual Action penalties are very easy to distinguish. Google is nice enough to leave you a message in your Webmaster Tools letting you know that a page on your site, or possibly your entire site, has a penalty. These penalties are often accompanied by worse rankings or complete deindexation.

Determining the Update that Caused the Penalty

When you receive a manual action, the note in Webmaster Tools will tell you what is wrong. It may even give you examples of what is wrong.

These penalties are very difficult to get out of. If you have received one of these messages, I wish you the best of luck. In some instances, it is best to cut bait, get a new domain and start over.

Algorithmic penalties are much harder to identify. There is no message telling you what is wrong. At first you will see a drop in organic traffic, however that usually is not enough to tell if a penalty has taken place or not. Traffic can drop for many reasons, many of which are not due to Google penalties. It is important to know the site’s traffic patterns and if there is any cyclicality to their traffic.

Once you have verified that the drop in traffic is not related to another issue, you should check your rankings. Algorithmic penalties often obviously alter all rankings for a distinct group of terms. Using Google Webmaster Tool’s search queries report, you can tell if any terms have dropped in the rankings. If there is a sustained traffic drop and a decrease in rankings, it is very likely the site has had an algorithmic penalty.

Determining the Update that Caused the Penalty

It can be much harder to figure out what penalty caused an algorithmic penalty. There are over 500 updates a year and picking which one is hampering your traffic is very difficult. Of course, this is much easier if you have access to Google Analytics. If you do not, you can get a really good idea using SEMrush.

If you have access to Google Analytics, you are in luck. There are tools that can help you. My favorite is a paid tool called Fruition Google Penalty Checker. You grant the tool access to your Google Analytics account, and it will make a graph of all the penalties, and give you a percentage of the chance that it affected your site.

Another tool that works well (and is free!) is called Barracuda. It works the same way as Fruition does. You grant the tool access to Google Analytics and it produces a pretty graph that highlights the updates. This tool does not give you the likelihood of the update affecting your site like Fruition does, which in my opinion, is well worth the cost.

Both of these tools are great and far superior to simply looking at your traffic and checking the update list.

If you do not have access to Google Analytics or Webmaster Tools, which is often the case for me, you can still get a good idea of what update caused the traffic drop using a traffic estimator tool like SEMrush. Using this tool, you can see drops in traffic and then correlate the month the traffic dropped to a penalty using MOZ’s Google Algorithm Change History.

While getting out of an algorithmic penalty is much easier than a manual penalty, it is no walk in the park. By determining what update affected your site, you can find the cause, then correct it. Most of these penalties are data based, so if you can get your site below the threshold set by the search engine, you should be able to rank well again.

Getting hit with a Google Penalty is no fun. Whether it is a manual or algorithmic penalty, the consequences can cost time and money. While figuring out if and why you have a penalty is doable, getting out of the penalty is another story entirely.